According to a Pew Research survey, 1 in 7 US adults has used a mail-in genetic test, such as those from 23&Me, AncestryDNA, or FamilyTreeDNA. These companies advertise their test’s abilities to tell you where your ancestors are from, or if you’re at risk for any inheritable diseases. According to 23&Me’s trait report, your DNA can even tell you if you are likely to have misophonia (hatred of the sound of chewing), a fear of public speaking, or predict your favorite flavor of ice cream. This technology seems futuristic, like something from a science fiction novel: how could they know all this just from a sample of saliva? The answer is in association. Genetics is a probabilistic science, and these companies have vast databases containing the DNA of millions of people to analyze and compare. Hypothetically, if there is a group of individuals who all consider mint chocolate chip to be their favorite ice cream flavor, and they all have similar SNPs (single nucleotide polymorphism variants) in their genome, then an individual with those same SNPs may be more likely to have the same ice cream preference. The DNA sequence and the trait are then associated. The same methodology is used for determining disease risk and ancestry. But this brings forth several unanswered questions: how accurate are these results, and where is the future of genetic testing headed in terms of privacy and legislation?

The Human Genome Project, which had the ambitious goal of identifying, mapping, and sequencing all the genes contained in human DNA, was completed in 2003. It cost three billion dollars and took 13 years and countless scientists to complete. Only a few years later, the first consumer genetic test came on the market from 23&Me. For $999, you could spit in a tube, send it off, and in a few weeks find out approximately where your ancestors came from, or whether you were at risk for common health conditions like heart disease. Now, that same test is a fraction of the cost at $99, and is a common holiday gift, generally regarded as a fun way to find out more about yourself. In one survey, 87% of users said they used the test to learn more about where their family came from. The two other most cited reasons were to get more information about their family medical history, and to connect with genetic relatives they might not know about. These three applications of genetic testing all have varying levels of accuracy or validity. 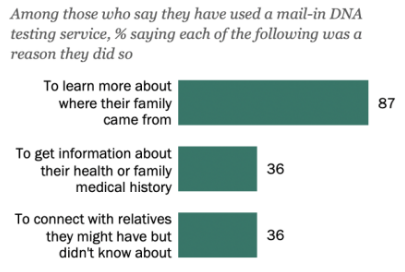 Ancestry testing is a bit of a misnomer. According to a Scientific American article, “These tests do not really tell you where your ancestors came from. They say where DNA like yours can be found on Earth today.” Saying you are 15% Finnish or 10% Russian is fun, but has very little actual scientific meaning. Your DNA cannot tell you who you are culturally, but it can be useful for determining where you have close genetic relatives in the world today.

Genetic testing for determining risk of developing a hereditary disease is frequently used in clinical settings. A doctor may order a test for a patient, and then discuss the results with them and their options going forwards. In an interview, Dr. Ali D. Guler, a genetics professor at UVA, says “[genetic testing] can tell you if you have any alleles that might make you more prone to any certain diseases.” For instance, if someone has a parent who has Huntington’s disease, and they learn they have the same mutation at the HTT gene that causes it, they will 100% of the time also develop Huntington’s disease. However, Guler also notes that not all diseases are as easily predicted by monogenic mutations. Most people who have a version of a gene that increases the probability for developing Alzheimer’s disease will not actually get it. However, learning from a genetic test that you are “at risk” for the disease may cause high levels of anxiety. It is a personal question for everyone whether or not they want to know if they could be at risk for a disease. The CDC recommends discussing the results of a genetic test with a certified genetic counselor. As for Dr. Guler? “Personally, I don’t want to know. I don’t know what I would do. There is no right decision.”

As for using genetic tests to find unknown relatives, the tests are extremely accurate in this regard. They look at short tandem repeats (STRs) in the genome, which are repeating units (2-4 nucleotides) that everyone has in their DNA. The length of these repeating segments varies wildly from person to person, but are passed down to family members with enough regularity that genetic relations can be ascertained from them. For instance, paternity tests are nearly 100% accurate. Using these tests to find genetic relatives is useful for people who are adopted, people who believe they may have unknown siblings, or people who wish to meet more of their extended families. DTC tests are a great tool in this regard, and there are many stories of people who used them to find their relatives and form close bonds with them.

One issue surrounding consumer genetic tests is the privacy of your genetic data. Unlike losing your credit card or bank number, once that information is out there it cannot be changed or gotten back. There is little regulation surrounding the protection of your genetic data once it is in the hands of the company. A 2008 law passed by Congress, the Genetic Information Nondiscrimination Act, or GINA, makes discrimination in by employers or insurance companies based on the results of a genetic test illegal. However, there are exceptions to this law, such as if you have started developing symptoms of a genetic disorder. As far as making sure this information does not get leaked in the first place, a Vanderbilt study found that of genetic testing companies, “78 percent said they provided genetic information to third parties in de-identified or aggregate forms without additional consumer consent.” They claim that de-identifying the data, or removing any connection to the person it came from, is enough anonymity to ensure that it cannot be used for purposes other than scientific research. However, University of Washington researchers found that it is possible to re-identify people from their raw genetic data through relative matching, where the genetic data of one’s blood relatives can be used to connect them. This raises issues around the risk of these companies selling de-identified data, and if there should be more protections around what can be done with your genetic data.

Genetic data can also be used in concerning ways by law enforcement. Police regularly use DNA found at crime scenes to create criminal phenotypes, where they use data to draw a computer-generated picture of what they believe the subject could look like. These renditions are often not very accurate beyond hair and eye color, and can worsen racial biases present in law enforcement and put people of color at risk for racial profiling. Genetic data taken from sexual assault cases becomes available to law enforcement as well. This data can be essential to convicting the perpetrator, and has helped win cases on numerous occasions. However, DNA from the victims is also entered into the law enforcement database. A woman identified as Jane Doe, who was assaulted in 2016 and submitted DNA as evidence, had that DNA used against her when she was arrested in connection to retail theft in 2021. Her lawyers argued this was egregious breach of privacy, and that it is unconstitutional to enter DNA evidence from sexual assault victims into law enforcement databases. Genetic data is an extremely powerful tool in criminal justice, but there is not much oversight in how it can be collected and used ethically. 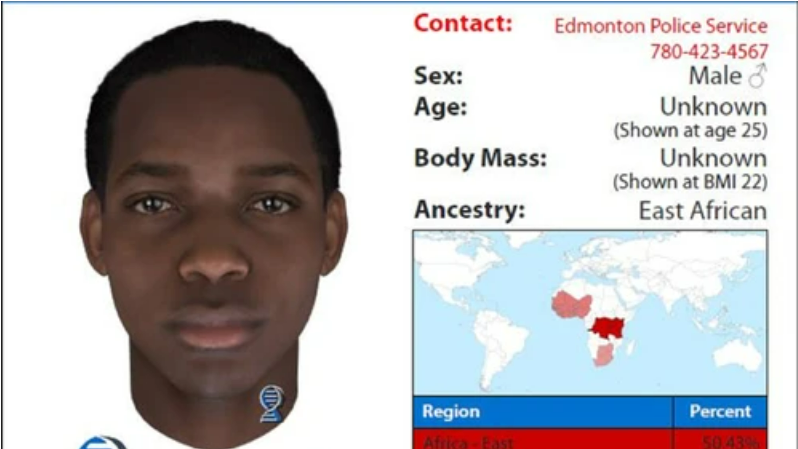 Computer generated image of a suspect from DNA

Direct to consumer genetic tests have exploded in popularity since their development. The databases they use to make their reports are only going to get larger, and their analysis methods better. These tests can be many things; a fantastic way to connect with previously unknown relatives, a fun tool to see where your ancestors may have come from, or a source of anxiety when determining risk of inheriting genetic diseases. It is important to understand the truth about what these tests can tell you, and to discuss the results with a professional after taking one. The future of genetic testing is bright, as long as it is properly regulated and understood by the public.

We are What We Eat: Evaluating the Correlation between Nutrition, Food Insecurity, and Mental Health

Discovering the History Written in Your Genetic Code; the Accuracy of Consumer Genetic Testing

A multidisciplinary publication exploring the intersection of healthcare and human rights.